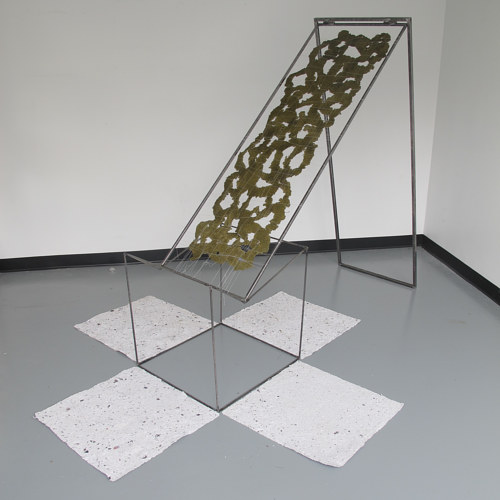 Placed pride of centre on my in-laws front lawn in West end Toronto, grows a meticulously maintained Morus alba Pendula, a weeping white mulberry tree, the inspiration behind this project. Initially, humour and affection was found in it’s grooming and staged appearance and while taking note of the popular mulberry growing around the city I began to look further into the origins of the tree.  Native to China, over four thousand years ago, the leaves of the white mulberry tree were cultivated for a myriad of purposes, the main intent to fatten silk worms. As the silk trade spread so did the trees. As well as food stock for silk producing silkworms, the leaves and berries were used to feed livestock and the leaves were commonly used in the creation of paper pulp. White mulberries were brought over during the colonization period and planted in hopes of establishing silk production in the colonies. In the Southern states, the white mulberry hybridizes well with the indigenous red mulberry and there is concern over the genetic longevity of the native red mulberry. As a result, the US has designated the white mulberry as invasive.

While walking my baby boy around the city in the spring of 2013 we documented every tree we came across as presented in a self-published book that contains over 250 images of white mulberries growing on lawns in west end Toronto. Massive hybridization has left us with a tree that has been domestically engineered to suit the purpose of lawn ornamentation. In this installation, I have created a screen out of collected mulberry leaves that has been interwoven with white silk. On the ground, a paper frames the cube that has been made with the pulp of the pictures collected of the trees.