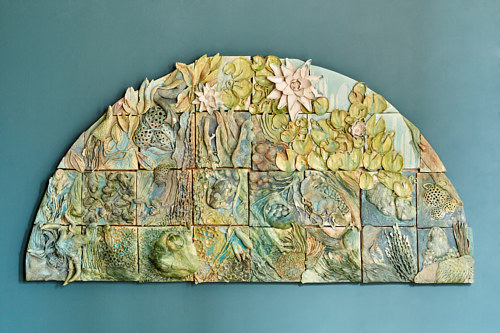 moving islands are restless is a body of sculptural work realized in 2016/2017 for my thesis presentation in culmination of an undergraduate degree at OCAD U in the Sculpture and Installation program.

The story begins on an island. A grouping of islands to be exact, a quick ride on a boat, a medium paddle in a canoe, or a long swim from the mainland. Made of sandy soil, fringed with beaches, they constantly shift and change depending on the flow of the lake and the erosion of shores from the surrounding land, you could say they are on the move. Or rather, were on the move. Modern day Toronto Islands have been reinforced with hard shores of concrete and rock to fix them in place. The sandy beaches get smaller yearly, the trees on the edge are caught surprised with their roots exposed, for this land was meant to move, and has become restless. After spending a spring residency on the Toronto Islands the allure of the place worked its magic, I wasn’t through exploring and over the seasons a treacherous, often thrilling bike ride down Bay Street was made to dig my feet in the sand, look out over the lake, find a long missed horizon and locate myself. What could the long complicated history of land use on the Island teach me about my Canadian identity? What parallels may be drawn between the natural world and our own?

Studying myth theory has taught me the importance of story, that we need them to help shape and explain a world view. However, a long, knotted history of colonization, abuse of land and people has made me question how we got here. Is nature beautifully cruel or necessarily so? I desire to grab a hold of one of the gnarly roots poking out among the beaches, dive into the undergrowth and follow the twisted artery to discover its origins. Stories have to start somewhere. Ideologies too. While detangling, my own myth began to take shape. On the Toronto islands there are two types of frogs, an American Bullfrog, and a Northern Leopard frog and borrowing on the universality of frogs in myth they have become lead roles. Through the relief the narration begins. It is a world that one may recognize however, seen with the imaginary creatures through out the installation I aspire to speak to the notion that the things we perceive are supported by all that we don’t.

Placed on the longest plinth are works made out of clay, they are of the island, they were created on the beach and subsequently pit-fired from the same spot. They have become lifeless since leaving the island however, they were made with the intention of turning the inside out, an instinctual exploration of bringing life into matter. On the tallest platform are the bronzes, they have been direct cast from elements in nature; by animating natural life I aim to bring a new sense of awareness and reordering to the world around us. These were created with the intention to become containers for consciousness for containers are meant to hold many things. The two smallest plinths hold remnants that speak to methodology and process, an integral part of a practice that is committed to making. The Mother sound sculpture with her many legs of sticks gathered from the island, shuttles her babies about. Baby babble emits from the pots, highlighting a mystical moment in speech development that I view as a transitory time from a limitless, universal place into learned systems of being. Combining found natural objects with sculpted elements explores notions of interconnection between perceptions of what is natural and manufactured. Opposite the mural a three-legged stick ceramic container has been animated to suggest movement and purpose. The final sculpture in the series, a tall, gnarly, swamp-like drawing may recall the interior twists and turns of intestines or perhaps the circulatory system, make an attempt to trace the complicated knot and one may begin contemplating the notion of untangling.

soon their success has them competing
some slip, slide and plop into the main channel,
to make the long treacherous swim
with countless dangers from above and below

when tired limbs pull heaving toad bodies onto the banks of a new territory,
all seems endless and full of promise

scattered throughout in limitless ponds
the leopard frog already inhabits that land
they share, there is lots of room for all

at first, at first
this is a familiar story
does it need telling again?
is it a story with a happy ending?

so what if I told you that it was,
that every baby tadpole grew up in the same pond as its mother
the toads kept about their business
and the frogs were happy to know them

then I would be lying because this story is endless,
happy or not

moving islands are restless
where land is finite
someone is always on top of someone else
a season is a destination,
a place where one may arrive early, late, or on time
weather systems are events
and concepts of time swirl around details of daily survival

a distant machine-din emits across the lake
to be replaced by the buzzing of insects that know their business
kaladisocoping greens, glittering of water
and we float, we listen, we feel
a summer heat promises fecundity by its heaviness

my eyes focus, they squint into the muck
my mind fills in for what I can not see

I am there to witness, yet I sense
that I am not really there at all